I made a pretty tasty little dish for lunch today.  I stopped at Sprouts on the way home from dropping off the kids to just grab a few items, when I saw this Royal Blend by Rice Select on a really great sale.  I love the Rice Select brand and this was a new one I’d never tried before.  It has light brown rice, red quinoa, and toasted freekeh.  Freekeh?  What the freekeh is that?  I had to look that one up, as it was new to me.  Apparently it is young green wheat grains that are toasted and cracked.  It has lots of fiber and fairly high protein content.  There you go, I love Google!  Here’s the article I read to get the info on freekeh if you’d like to read more about it.

Anyhow, I grabbed some bell peppers that were also on sale and headed home to go through my fridge and pantry to figure out what else I could throw in with this for lunch.  Here is what I came up with: 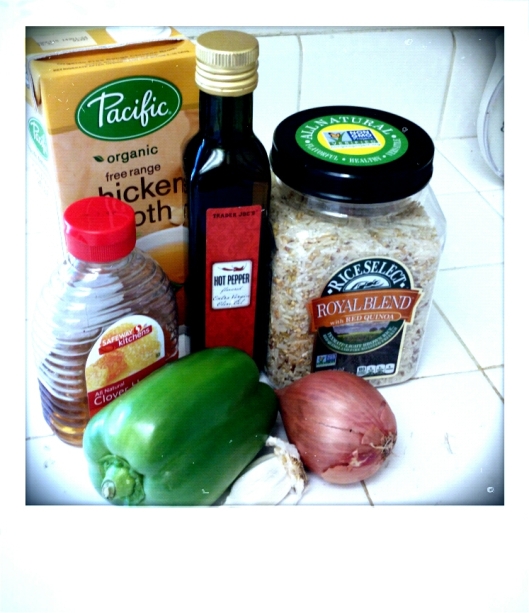 Just a few ingredients for this dish. My aunt bought me the hot pepper infused olive oil from Trader Joe’s for Christmas. I was excited to try it out!

1 large shallot, chopped
1 bell pepper, chopped
2 cloves garlic, minced
2 Tblsp hot pepper infused olive oil (if you don’t have this you can use regular olive oil instead and add some red pepper flakes if you want the little kick or leave them out if you’d rather not)
1 cup brown rice and red quinoa blend
2 cups chicken broth (I love the Pacific brand from Sprouts, it has so much more flavor than the stuff in a can)
1 or 2 Tblsp honey, to taste
1 tsp Montreal Chicken Seasoning by McCormick (not pictured, I threw it in at the last minute)
Salt and pepper to taste.  I didn’t put in any salt at all since there is already some in the seasoning and in the broth, and I didn’t miss it.

In a sauce pan, heat olive oil over medium.  If you’re using regular olive oil and red pepper flakes, you should let them gently simmer for a few minutes to really get the flavor going.  Then add shallot, bell pepper, and garlic and saute until the shallots and garlic are translucent.  Add the rice and broth, stir, and bring to a boil.  Then reduce heat and cover.  Let the rice cook for about 18 minutes, until all liquid is absorbed.  Add honey and Montreal seasoning and stir well to combine.  Let it cool for just a few minutes before serving.

That’s it!  I think this would be a really good main dish if you added some chicken as well.  There really isn’t much heat to it, in my opinion, but I love really hot spicy food, so I may not the best judge if you don’t.  Sriracha, anyone?!  I hope you enjoy this dish as much as I did!

So sorry that I have been absent for a couple weeks!  I have been busy working on a few new crochet patterns which I hope to have up in the next few weeks.  One of them is stalled because I ran out of the yarn I was using for it, so that will have to wait a few more days!  I also have a couple big tests at school coming up so I am trying to avoid the giant time suck AKA the internet so I can get some major studying in.

I was just looking through my old posts and realized that I never posted my recipe for Garlic Scallion Mashed Potatoes that I promised several weeks ago.  I just love these potatoes and I hope you give them a try!  They are a great way to change up your traditional recipe and add some major flavor to your meal.  Also, they have no butter or milk in them so they are a lighter version of what you’re used to, but still very creamy and delicious.

So, here is what you need:

2 lbs potatoes, cut into large chunks or halved if using a small variety
2-4 cloves garlic, depending on your taste (I use 4!)
5 scallions chopped, both white and green parts
1/3 cup chicken stock
2 Tblsp Sunflower or Olive Oil
Salt and Pepper to taste

Grab a big pot and dump in your cut up potatoes.  I usually use Yukon Gold potatoes because they have a great texture but these were Russets that were threatening to sprout a gajillion eyes if I didn’t use them up.  Also throw in the garlic cloves.  You can leave the paper on the garlic if you’d like, it will just slide off once they’ve been cooked, but then you have to dig them out of the hot potatoes, so your choice.  Cover the potatoes with water and place on the stove over high heat and bring to a boil.  While you’re waiting for that to boil, turn on some music and do a little dance in your kitchen.  Ignore the kids making fun of your dance skills, they don’t know what’s up.  Am I the only one who cooks with music on?  I almost always have some tunes playing pretty loud while I cook!  Okay, so once the potatoes are boiling, throw some salt into the pot and let them boil for about 15 minutes.

Once the potatoes are done, I remove them from the pot to a bowl with a slotted spoon so I can easily grab those garlic cloves and remove the paper from them.  Add to the bowl of potatoes and garlic the scallions, sunflower or olive oil, chicken stock, salt and pepper.  Give them a good mash and they are done!  I use my hand mixer since I somehow never acquired a potato masher.  Don’t they look colorful and yummy?! 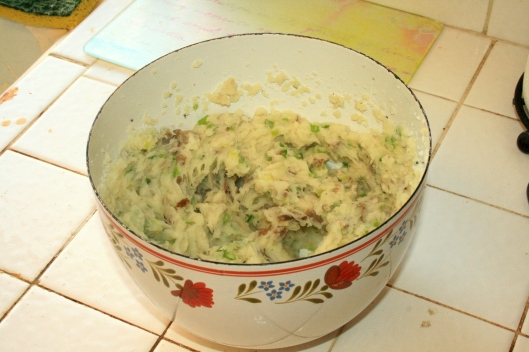 It’s okay if you eat a few bites right out of the serving bowl, I might possibly be guilty of that myself!

These are killer along side the Peach Whiskey BBQ Chicken I posted a few weeks ago, but would go great with steak or pot roast or well, anything!

Oh my goodness, I have been gone for a bit!!  So sorry about that!  I had a few big lab practicums and a final at school, all back-to-back.  Studying for those really dominated my life for a few weeks.  Taking a 6 unit Anatomy and Physiology class in 8 weeks is no joke!  School started up again for T (I now have a 2nd grader!  Yikes!!!) as well as tackle football.  The practice schedule has been pretty hardcore!  Anyhow, now that my litany of excuses for disappearing for several weeks from blogland is out of the way, let’s get down to business, shall we?

Today, as I was rummaging through my fridge for something to cook for dinner, I saw that I had two cucumbers that were in need of being eaten before they went bad in a few more days.  My fridge is looking pretty sad right now…I desperately need to hit the grocery store for a big stocking up.  I’m still not quite sure what I am making for dinner, but I knew right away how to prepare these cucumbers into a lovely vinegar marinated side dish!  And with summer winding down but the heat still blazing here in So Cal, I think this is the perfect addition to any end of summer BBQ.  Thankfully my pantry is the opposite of my fridge right now and I had just what I needed to whip up this refreshing side dish!  Here is what you’ll need: 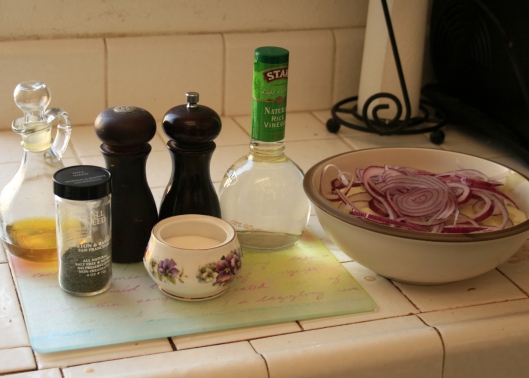 I didn’t decide to take an ingredients photo until I had already sliced the cucumbers and onions. Whoops. I get a little ahead of myself sometimes!

This recipe is so simple!  Just combine the sliced cukes and onions in a large(ish) glass or ceramic bowl.  Don’t use a metal bowl, as you don’t want the acidic vinegar to react with metal (gotta remember your chemistry in the kitchen!!).  Then, combine the remaining ingredients in a small glass bowl and stir with a fork or whisk until they are nicely combined.  This is such a fresh tasting marinade, you’re going to love it!  You can even try putting in a dollop of Greek yogurt or sour cream for a creamy texture. Next, pour the marinade over the top of the vegetables and give it a great big stir to combine.  I used my fingers to separate the cucumber slices to make sure that everything was evenly and wonderfully coated.

So pretty! I love the colors here.

Go ahead and cover this up with some plastic wrap and let it sit in the fridge for at least a few hours before serving.  I did sneak a bite or two before I covered it and I can tell you this is sooo yummy!  I can’t wait until it’s cold and I can eat it next to some grilled chicken for dinner tonight.  I bet this would be great as a side to some seared salmon.  Enjoy!

Promote Your Page Too

The Green Dragonfly
The Little Knittery

Making stuff with two needles, a hook, and some yarn.

The Fresh Princess of Bel Air

a blog about food in Southern California, South Yorkshire & beyond

Just what the title says, a little of everything that I enjoy

crochet for the home

not your average crochet
mille makes...

A blog about all things beautiful in life

One young family creating their own Ponderosa in a city that likes to keep things weird.

A little bit about whatever I'm interested in at the moment!

You will always be lucky if you know how to make friends with strange cats.

The mad adventures of a lesbi@n hooker and her siamese cat!

A blog about crafting, cooking, reading, family, and enjoying all this life has in store!