Last week I finally bought a crochet book that I’ve had my eye for a while.  I’ve been working on some bigger projects and was really in need of an instant gratification project, so I turned to my new book for some inspiration.  A short while later, after tweaking the pattern for one of the squares, I had some really cute coasters!

After the book review below, I’ll show you my mods to the pattern so you can make your own Daisy Chain Coasters.

I can’t seem to put down Jan Eaton’s book, 200 Crochet Blocks.  I wanted this book after seeing some really beautiful crochet projects done with the squares, such as Cherry Heart’s Sampler Blanket and Coco Rose Diaries’ Lazy Daisy Scarf.  The book did not disappoint, the squares are lovely and there is something for any crochet taste.

Also, I love that each square has a “mix-and-match” section at the end of the instructions which tells you other squares in the book that it would mix well with.  With 200 squares, it’s helpful to see some suggestions at a glance for selecting a mix of squares that will work nicely together in a blanket.  There is also a section about color that outlines how you can easily create your own color palettes.  Some of the blocks are shown in multiple color schemes to give you an idea how much color can change the look of the same block.

I used worsted weight yarn and an F (3.75mm) hook.  My coaster with the picot edge is 5.5″ in diameter and the scallop edged one is 5″ in diameter.
You can find the Daisy Chain square on page 99 of Jan Eaton’s 200 Crochet Blocks.
Complete Rounds 1-4 in one color per the pattern instructions.

This is what your coaster will look like after Rounds 1-4.

Round 7 has two variations: Scallop Edge and Picot Edge

Please let me know if you have any questions at all about this tutorial.  I try to make it as clear as possible, but if something doesn’t make sense, I am more than happy to help you out!

I don’t like being sick.  I don’t know anyone who does, but this bug that I’ve got right now is really a nasty one!  And sharing is caring, you know, so I gave it to my husband and he’s now down for the count, as well.  Thankfully, the kids have been spared.  So I’ve had plenty of time to lay around this past week and work on some projects while catching up on old TV shows.  Right now, we’re watching The Shield, which we never watched when it aired, and it’s really good!

Months back, I made several Sunburst Granny Squares with no real intent for what I was going to do with them.  This is one my very favorite motifs to make, they come together very quickly and I just love the look of the stitches. 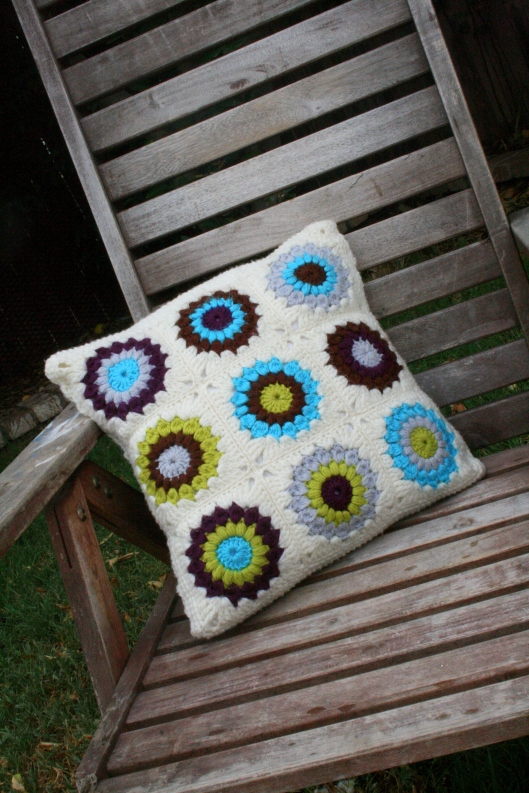 I’ve been wanting to make a crocheted cushion for a while, so when I finally got around to buying a pillow form, I dug the squares out of the bottom of one my many bags of yarn and started hooking them together.  I attached them with slip stitches through the outer loops.  Lucy from Attic24 has a great tutorial on this here. 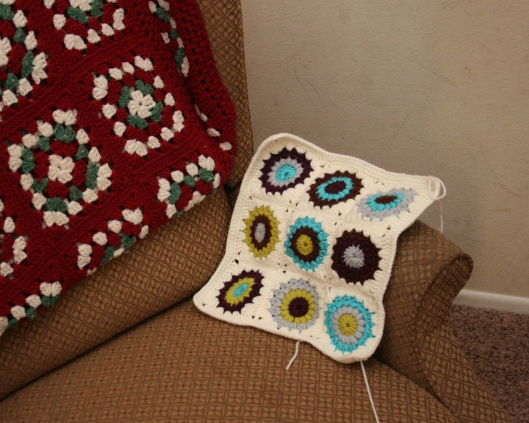 Since I didn’t make these squares with a cushion in mind, it turned out they were a bit too small for the 12×12 pillow form I wanted to use.  So, after joining them together, I did a row of hdc all the way around which pretty much did the trick of making the front big enough.  I added 3 extra hdc in each corner stitch to avoid buckling.

Then I crocheted the back of the cushion right onto the front, using Cherry Heart’s tutorial here.  She has two tutorials on this, but it worked just fine for me using the first only. 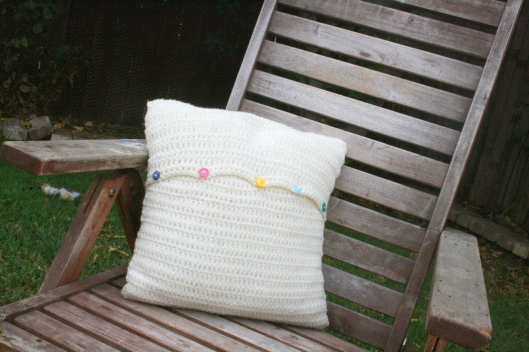 Finally, I added some buttons to secure the back.  Isn’t it cute?!  I really love how it turned out!  My sister-in-law is going to take it home but I have several more of these squares in the same colors, so I am going to make another to stay on my couch. 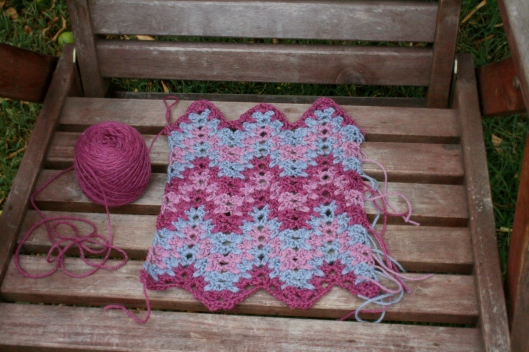 This pattern is a Japanese chart that I saw on Pinterest months ago and have been admiring ever since.  I use mostly worsted weight yarn, but I knew I wanted to use a light yarn for it and this was perfect.  You can find the chart here.  It’s all in Japanese, but is pretty straightforward as the chart is broken down into the first several rows.  If enough people are interested, I wouldn’t mind writing up a post on how to follow this chart, so let me know if it’s difficult for you to decipher.

What little boy doesn’t love wearing a cape?  I have one who just can’t have enough capes!  When I found this adorable embroidery pattern by Love the Blue Bird, I asked C what he would like me to put it on and the answer was, of course, a cape.  I had a few capes left over from his birthday party last year, so I put one in an embroidery hoop and got to work.  I used to do a little cross stitch years and years ago, but I haven’t done any embroidery before.  I think it turned out pretty well.  C wants me to add an alien, an astronaut, and Jupiter!  So, I have to look up some more patterns and add them to his space cape.  His birthday party is this weekend and he says that he wants to wear this cape to the party.

If you want to see how to turn a pillowcase into a cape like this one, check out my post about C’s birthday party last year, here.

And finally, the hummus!  This is one of our favorite snacks.  I have tried many, many recipes for homemade hummus and have found what I think is the best recipe out there.  It is Alton Brown’s recipe, called Hummus for Real.  I’ve never made the slow cooker chick peas called for in the recipe, I just use a 16 oz can of chick peas (also called garbanzo beans), drained and rinsed.  I buy the tahini from Sprouts, which is a farmer’s market style store.  Places like Whole Foods and Trader Joe’s should carry it as well.

I think this is the best recipe out there and it is a great base for making flavored hummus.  I’ve added in roasted red peppers and it’s killer.  Also, you can grill some jalapenos or Anaheim chiles on charcoal grill and add them to the hummus.

I’m off to take some more cough medicine and hopefully ditch this awful bug!  The doctor said I’ll probably cough like this for another week, though.  I have a birthday party to get ready for, so I’ve got to fight through it!

Hello to all of my lovely readers!  I’m not sure how many of you are still here, I’ve been gone from my little blog for so long it seems.  Sorry about that!  Life has a way of taking over my bloggy life and next thing I know, it has been months since I have written a post.  The good thing is that I’ve been busy working away on some great things in my life and that nothing terrible is at fault for keeping me away (thank you to the readers that sent me nice little messages over the last few months checking in with me, everything has been busily wonderful!).

This post has a lot of pictures of what I’ve been crocheting and where I’ve been traveling, so I hope you don’t mind if I just let the photos do much of the talking! 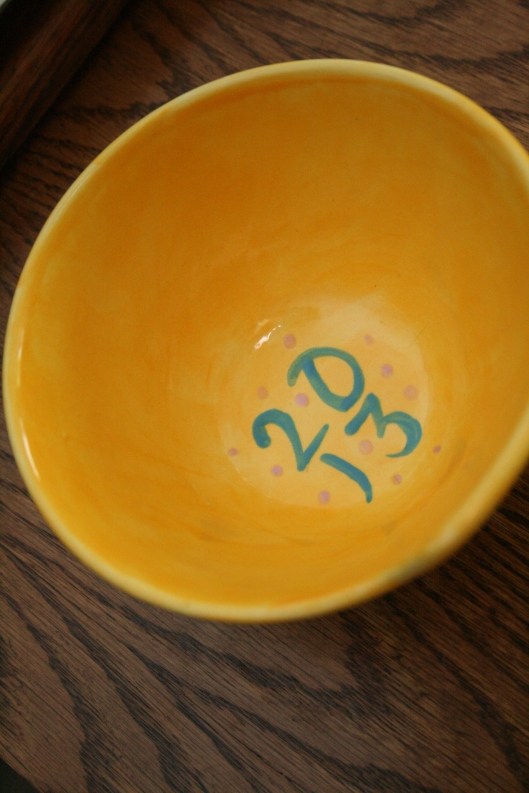 For Mother’s Day, my husband and boys took me to the local ceramics shop and we painted a few items.  They had this noodle bowl which has a hole in it for holding chopsticks.  I, of course, immediately thought “yarn bowl!!!”.  When I picked it up after they fired it, I was so happy with how lovely it turned out.  And, naturally, C thought it would be a great place for Kirby to hang out when I’m not using it for yarn. 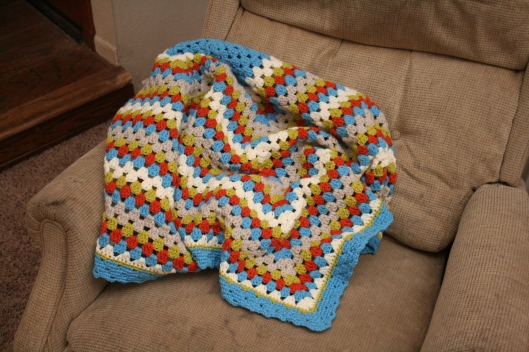 Our friends are expecting a baby boy in a few months and of course I had to make a blanket for the little guy.  I can’t wait to meet him!  We have been friends with this couple since high school.  I have actually known the dad since we were 12 and he’s been my husband’s best friend since they were in Jr High!  Which is kind of funny because although my husband and I had a lot of mutual friends, we went to different schools and didn’t meet until I was 19.

This little lovely is a pincushion that I made and I think several more are in order.  It’s just a fun little project and keeps my yarn needles from getting lost.  You can get the pattern over at Cherry Heart.  She has a wonderful blog that I really enjoy browsing, so do go take a look!

This is just a little sneak peek at the colors I’ll be using for a clamshell cushion.  This is another of Cherry Heart’s patterns and I’m really enjoying it. 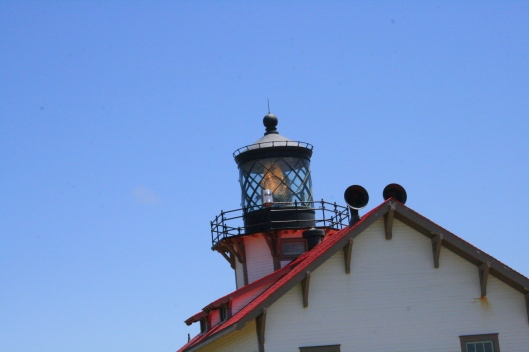 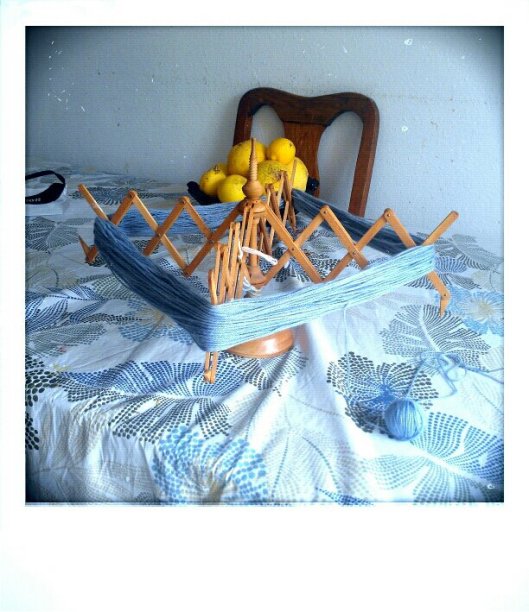 We took a very fun trip up to Mendocino, CA.  It’s about an 11 hour drive from where we live, so it was quite the drive, but so worth it!  We were there to see our friends get married.  The ceremony was right on the bluffs, with the ocean in the background and it was just gorgeous.  Of course, I had to find the LYS in town and I picked up some very lovely Canopy Fingering.  It’s blend of baby alpaca, merino, and bamboo and it is crazy soft!  I’m using it to crochet a ripple cowl from a Japanese chart that I’ve been admiring for quite some time.

I’ll be posting a new pattern soon, as well as a few new recipes.  I’ve so missed being on my blog and I hope ya’ll forgive my absence!  Go……….create something beautiful today!

Promote Your Page Too

The Green Dragonfly
The Little Knittery

Making stuff with two needles, a hook, and some yarn.

The Fresh Princess of Bel Air

a blog about food in Southern California, South Yorkshire & beyond

Just what the title says, a little of everything that I enjoy

crochet for the home

not your average crochet
mille makes...

A blog about all things beautiful in life

One young family creating their own Ponderosa in a city that likes to keep things weird.

A little bit about whatever I'm interested in at the moment!

You will always be lucky if you know how to make friends with strange cats.

The mad adventures of a lesbi@n hooker and her siamese cat!

A blog about crafting, cooking, reading, family, and enjoying all this life has in store!